As the lockdown enters its eighth week, tattoo artists and studio owners, who are on their knees as the financial impact deepens, have started a petition to lobby the government to allow their sector to reopen.

The petition forms part of a submission sent to the government in an attempt to open shop as the lockdown eases to Level 3 from next month.

Under the banner of a newly created NPO called Tattooers Unite SA, several tattoo studio owners have made it their mission to save the industry, imploring the government to consider allowing the industry to operate as lockdown regulations slowly ease.

The NPO was established with the help of Africorp Accounting Solutions to help legitimate studios who are facing the risk of closure and tattooists who have found themselves in financial need as the lockdown removed their only source of income.

However, as it stood, studios and tattoo artists would only be allowed to return to work at Level 1 of the lockdown which might be too late, according to Derek Baker, one of the founders of Tattooers Unite SA and owner of Metal Machine tattoo studio in Cape Town.

“The simple answer is that if studios don’t open in Level 3, there won’t be any studios left. There are hundreds of tattoo studios all over the country, comprising thousands of artists who have made tattooing their lives,” Baker told News24.

He said the petition, which already had more than 7 000 signatures as of 20 May, formed part of a submission that was sent to the Department of Trade and Industry on Tuesday.

The tattoo industry, like many other business sectors in South Africa, has suffered huge financial losses since the lockdown was enforced on 27 March.

“After eight weeks of not earning anything we, as tattooists and shops, are really taking strain as the bills keep coming and no way to pay them. We get paid for each tattoo that we do and the tattooists who work for the studios work on a commission basis, so no work no pay,” Baker said.

Louis Potgieter, who owns True Blue Tattoo Studio in Pretoria along with his wife Meghan, echoed Baker’s sentiments that most artists might be dipping into the last of their savings at this point.

“The problem only intensifies when looking at the backlog of rent due by shop owners. Going back to work with hundreds of thousands of rand in debt is not a very pleasing thought,” Potgieter, who is also a part of the Tattooers Unite SA, said.

Thys Uys, owner of Fallen Heroes in Johannesburg, said many artists lived hand to mouth as they survived on weekly earnings.

All three shop owners said they had applied for government assistance, which has not been received.

Proposal to open at Level 3

The argument to open studios at Level 3 is simple – professional tattoo studios already adhere to the strictest of hygiene standards.

“We want the government to know that we are taking the virus threat seriously, but also feel confident in our knowledge of PPE [personal protective equipment] and safe practice and should be allowed to continue working to provide for our families, our customers and give back to the economy,” Baker said.

Prior to the Covid-19 pandemic, tattooists worked with the constant awareness of TB, hepatitis, as well as HIV for many years.

”So, this is just another virus that we need to add to our skills base. All professional tattooers have training in the correct use of PPE, blood-borne pathogen training and exposure protocol,” he added.

Baker, Potgieter and Uys said professional studios were clinically controlled and a protocol for Covid-19 had been created to further reinforce hygiene practices.

Tattooists are under no illusion their trade does not fall under what would be considered as an essential service, but have contended if the industry is not allowed to operate soon, their financial situation will worsen to the point where shops may close for good and artists will have to become part of the new lockdown black market and tattoo from home as a final act of desperation. 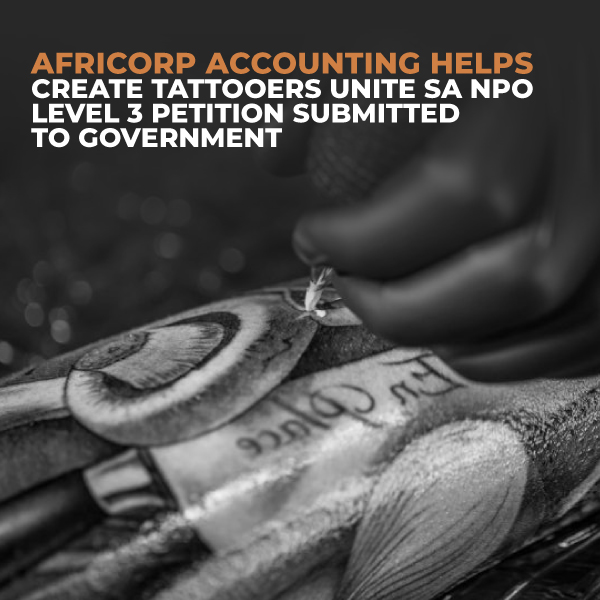