Government has published more than a dozen new directives around South Africa’s lockdown regulations since the official introduction of level 4 restrictions on Friday (1 May).

These directives seek to clarify issues around the new restrictions as well as how the new rules will impact specific sectors such as transport and the new curfew.

Below is an overview of the biggest changes announced and what they mean for ordinary South Africans.

Rules around the curfew

Transport minister Fikile Mbalula published six separate directives on Monday (4 April), clarifying a number of key issues relating to public and private travel. Two of the directives focused on the introduction of the new evening curfew and travel times.

As part of the country’s new level 4 lockdown, a new evening curfew prohibits all South Africans from leaving their homes between 20h00 – 05h00 unless they are an essential service worker or have to deal with an emergency. However, the new directives state that South Africans will have a one hour ‘grace period’ in the evening as follows:

In a separate directive, Mbalula further clarified that this curfew does not apply to South Africans making long-distance trips between provinces between 1 – 7 May.

This means that the validity of all learner’s licence, driving licences, motor vehicle licence disks, temporary permits and roadworthy certificates that expired during the lockdown has been extended for another 30 days (from 4 May).

On Monday, the South African Revenue Service (SARS) published a new directive which expressly states that tax officials may return to work as part of the financial services sector. In simple terms, the directive confirms that tax practitioners and other providers that offer these services can operate as normal, explained Jean du Toit, a senior tax attorney at Tax Consulting SA.

“It is no surprise that tax services would fall under the umbrella of essential financial services – so it is quite interesting that the Minister decided to issue a directive to categorically confirm this.” On the same day, SARS officials communicated that they will be returning to the office on 5 May 2020, du Toit said.

“Perhaps this is purely serendipitous, or perhaps the Minister issued the directive out of necessity, cognisant that SARS will be firing on all cylinders from this week onwards. This aligns with what we have experienced in practice, where there is a definite spike in SARS activity.”

Rules around IT workers

The Department of Communications and Digital Technologies published a new directive which outlines the Information and Communications Technology (ICT) workers that will be allowed to work under the country’s new level 4 lockdown regulations.

This includes the cloth face masks which are requirements for all workers, but also the introduction of perspex dividers, spacing requirements and strict cleaning regimes for certain industries.

Minister of Justice and Constitutional Development, Ronald Lamola, published a directive indicating which functions of the court and other parts of the legal system will be allowed to return to work under the level 4 restrictions.

The directives restrict access to the courts to people who have a material interest in a case, and allows for the postponement on criminal cases in certain circumstances. In addition, the directive states that the small claims court matters and civil matters not considered ‘urgent’ will not be heard during the level 4 lockdown.

Rules around artists and performers

The Department of Arts and Culture outlined the artists and performers who will be allowed to return to work under the level 4 lockdown restrictions.

The Independent Communications Authority of South Africa published a new gazette which relaxes regulations for certain broadcasters in the country.

One of the biggest changes is that broadcasters (such as the SABC) will not have to follow quotas around local content. Broadcasters have also been exempted from some advertising and programming requirements. 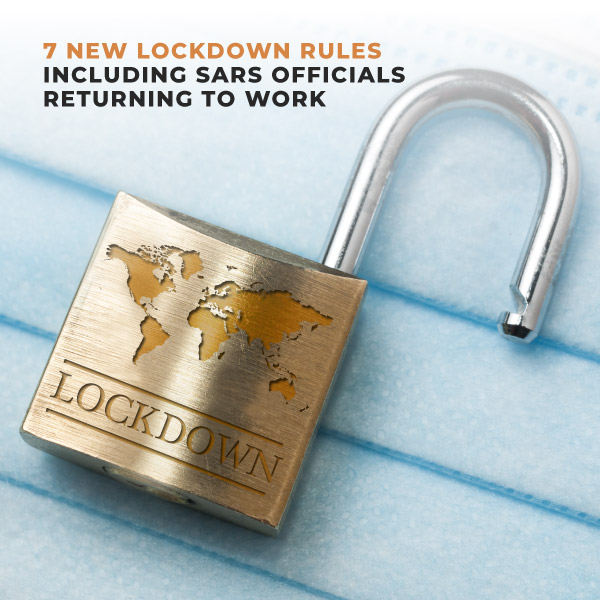 NEWS | WORKING FROM HOME: WHAT COVID-19 MEANS FOR TAXES ON EXPATS STUCK IN ...