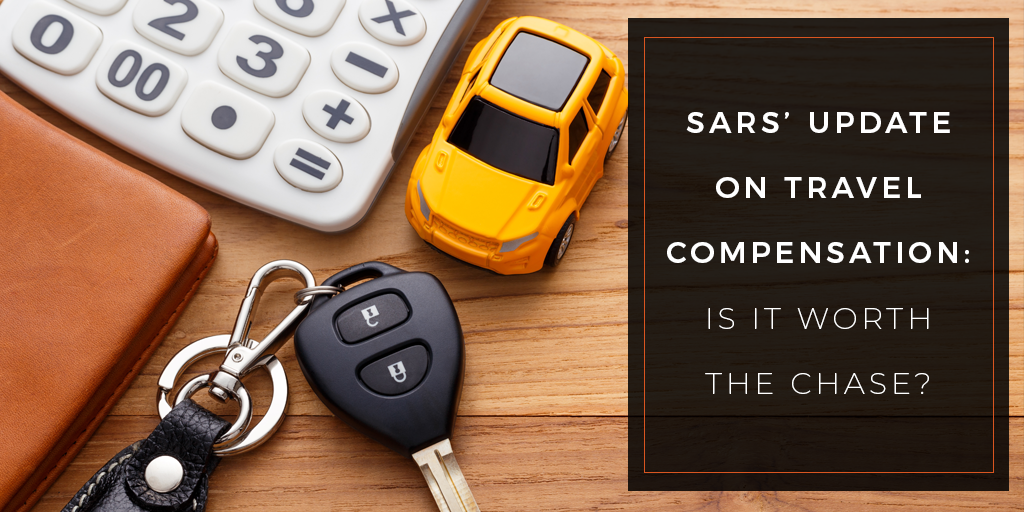 Which is better – company car or travel allowance? It’s a question that regularly plagues both employers and employees. “In light of new SARS requirements for travel reimbursements, it needs to be carefully revisited,” says Jerry Botha, Master Reward Specialist and Executive Committee member of the South African Reward Association (SARA).

Botha is referring to the removal of the 12,000 km limit that was previously applied to reimbursements. If travel exceeded this distance was reimbursed at a per kilometer rate higher than that prescribed by SARS, or other travel allowance was paid, the total amount needed to be reflected under code 3702. However, reimbursement paid at or below the prescribed rate was declared under code 3703. Either way, PAYE was not deducted from the employee’s income.

From 1st March 2018, if an employer reimburses staff at a per kilometer rate higher than that prescribed by SARS, they have to split any reimbursement into two components. The portion that falls within SARS’ rate must be declared using code 3702 while the portion above that rate must be reflected under a new code, 3722. If the employer also pays a fixed travel allowance, this is declared separately with code 3701 as usual.

Under this new system, the excess reimbursed portion is subject to PAYE just like a fixed travel allowance or fuel, garage and maintenance cards. Reimbursement at or below the prescribed rate is reported using code 3702 as before.

“More important than the new code and method of calculation is the removal of the 12,000 km limit and the introduction of PAYE on the excess portion,” says Botha. “These changes affect the reward dynamics significantly.”

Employers should therefore review the new rule to ensure their workers are enjoying the best tax and cost benefits, especially those who reimburse certain segments of personnel well over the prescribed rate.

It may be that a lower reimbursement rate puts more money into an employee’s pocket, as there is no PAYE thereon and the reimbursement does also not have to be substantiated by a logbook on filing of the employee personal income tax return.

Is it time to offer a company car?

In seeking travel compensation that is fair and rewarding to a worker, it is a good opportunity to decide if they would benefit from a company car. “As a rule of thumb,” advises Botha, “if more than 60% to 65% of an employee’s travel is for business purposes, they are losing out by using their personal vehicle.”

Typically, fuel only makes up 50% of the total cost of running a car. Additional expenses, like maintenance and insurance, or depreciation on the vehicle are not covered by travel allowances, reimbursements or fuel cards. A highly mobile employee may also have to bear the early replacement costs of their private car.

The vehicle buying habits of South African employers and employees remain routed in emotion and decisions are not made based on running the numbers. This causes the employer to be burdened with too high fleet costs, whilst the employee is mostly significantly out of pocket, often only realising the mistake when they want to trade in their vehicle.

According to Botha, there remains a sweet spot for travel reimbursement, reimbursement with travel allowance and company vehicles. The employers who care about the cost and staff allows all three, as part of their Total Package approach. Especially for employees on high business travel, the employee is severely disadvantaged where not on a company vehicle. “If an employer does the calculation correctly,” says Botha, “they will see that a company vehicle is the best reward strategy in this case.”

Botha advises organisations to engage their reward specialist to ensure their employees receive the appropriate package for their needs.

For more information, please send us an email below:

Is it worth chasing travel rebates under new SARS’ rules?

Is it worth chasing travel rebates under new SARS’ rules?

SARS’ new rule: Is travel compensation still worth the chase?